The assassination attempts on Neil have become persistent.  The cabal is proving creative and resourceful, but we are taking all appropriate precautions – and they just can’t keep a good man down! 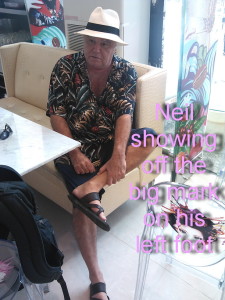 The week of March 9th, after a meeting, Neil was not feeling well.  By Saturday the poisoning symptoms became obvious and Neil started his antidote protocols put in place by Dr. Group.  By Sunday he was feeling better.  By Monday he was near 100%.  But on Tuesday Neil felt exhausted and passed out for two days.  When he regained consciousness, his hands and feet were paralyzed.  There was major swelling in his left ankle.

After the swelling went down on his left ankle, two red marks became obvious.  Hair in that area was gone.  And what was confirmed to be an injection site was located. 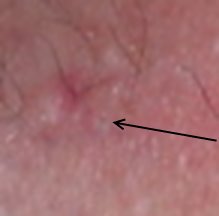 The arrow on the image to the left is a zoomed-in section of Neil’s ankle.  You can see one of the red marks slightly off center to the upper left.  Just left of the arrow you can see a white circle with a dark center, which has been confirmed as the injection point.

So how did they get to Neil?  Experts that we consulted with have concluded that it was a remote control flying robotic insect which likely infected Neil the evening of Tuesday, March 18th.

Neil is recovering nicely thanks to our experts including, instrumentally, Dr. Group.  Neil has recovered all functions of his extremities, including his fingers and toes.  The swelling is completely gone.  He is now walking on his own accord, and is nearly 100%.  It was, however, the most painful poison recovery he has encountered to date.  And the back-to-back attempts reveal the murderous resolve of our enemy.

Last Saturday, March 22, Neil and Jo were in the hotel suite when they noticed a bug flying around.  Jo started running around in a frantic manner swatting at it.  Neil was still not very mobile, so he was confined to shouting encouragement to Jo’s hot pursuit, and swatting at it when it would buzz him.  The bug would turn on them and then they would retreat, Joe screaming, and Neil hobbling.  The situation reminded Neil of a Marx Brothers episode – the only thing missing being a cigar and a video camera. 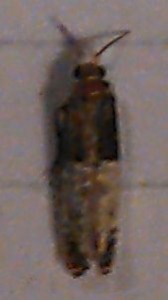 Jo hit the thing several times and thought he had killed it four times, but it would just not die.  Finally he got it down and  smashed it with a piece of paper.  Jo immediately felt dizzy and his hand became numb.  The “bug” was thoroughly squished, but contained no blood whatsoever.  And it was still moving around!  Jo is familiar enough with bugs in Indonesia.  This was nothing indigenous that Jo has ever come across before. They photographed it and sent it out.  On the left is an image of it.

Neil is fine.  We have established protocols to defend against these new types of attacks.  The end is near.  Their efforts have become desperate, but they fail time after time – not just because we are more clever, which we may or may not be, and  certainly not because we have equal technology, which we do not, but because this is our time now.

Our opportunities, our survival, our moves and accomplishments seem to have become blessed by God, nature and fate.  While we will continue to take every precaution that is reasonable and available, our real strength lies in our being right, which is our might.  God bless Dr. Group and all who support our efforts.  We will prevail.